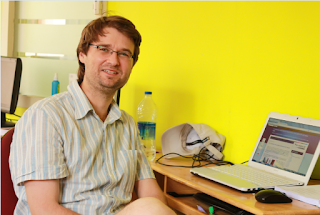 Mr.Michael Joel Parin or Mike Parin, the great explorer of good times rejoice every moment of his expedition by learning each aspect of the places he visit. This time Mr. Mike has arrived in Kerala, India to get trained in RHCDS and CCNA. He came to know about IPSR, through his colleague and found the place to be the best in training. According to him, the best aspect of being in Kerala is the warm welcome and receptiveness granted by the people of Kerala.
Mr.Mike Parin is an RHCE living in the Czech Republic with six years of experience in HP-UX/Red Hat Linux System Administration and a couple of years before that he was working as a Debian Linux admin/PHP developer. He has a very little experience in Cisco but has prior knowledge in it imbibed over the years. He also earns a business degree majoring in Information Systems. Mr. Mike’s thrive for exploring new places has taken him to India several times. He possesses a vast knowledge of  India which he gained over frequent flying to India. The first visit was for a couple of months through many of the major tourist sites including Delhi, Agra, Varanasi, Goa, down to Bangalore, Chennai and Pondicherry, back up to Calcutta and Darjeeling.  Another time was for five months with his wife, trekking for three weeks in the Zanskar region in the Indian Himalayas and traveling just in the North West states like Himachal Pradesh, Punjab, Rajasthan and Gujarat. Being an Australian guy, who would obviously be sports mad; Mike on both the trips managed to watch some Australia vs. India test matches too.
IPSR Team cordially invites Mr. Mike Parin and we wish him all the success.