Synergizing the Linux Training Program at its Best 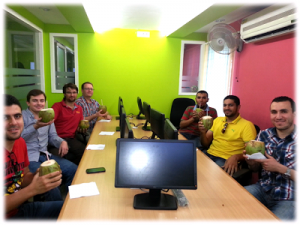 The vital force behind visitors coming to India is the benign service granted at its best. Like a vibgyor which looks divine when all the colours are merged, the group learning among people from different parts of the world is at sanctity when it’s blended with all the features of perfectionism that is; trainers, facilities and of course the cooperation of the trainees. This is for the first time since its journey in providing International Certifications Training; IPSR witnesses the arrival of a pool of trainees at a time.

From the sacred deserts carrying the mystic winds we have Mr. Hamed Ahmad Al Rajih from the Kingdom of Saudi Arabia. He is a Storage Server Support Engineer here to certify in RHCE. The next person who has joined IPSR is Mr. Timothy James Barker Simson. He hails from the land of Kangaroos, Australia. This Aussies gentle man is at IPSR through the good words in air and internet. Mr. Timothy is Head of Projects and to accelerate his career, he is getting expertise inRHCVA. With the pride heritage of “Viking Age” we have with us, Mr. Eivind Olsen from Norway. He ascertained IPSR directly from the horse’s mouth – the official Red Hat Website. He is a System Admin getting trained in RHCDS.

Mr. Maraghy is a Linux System Admin by himself and he is with us to update his knowledge to RHCDS. Mr. Mohamed Belal is upgrading himself to be an RHCDS. May be because he is a Communication Engineer, he noticed us through word of mouth. It was not so difficult for

Mr. Islam Gaber to separate wheat from the chaff; a very few browsing brought him directly to IPSR to expertise in the prestigious certification offered by Red Hat, RHCA.

The cross-cultural entity synergises between the perfect knowledge transference and the pure blend of training.  It’s a real joy to welcome these novices to the educational tourism of IPSR Solutions Ltd. Wish you all the best for the future ahead.